8 Things You Need to Know When Moving to Orlando 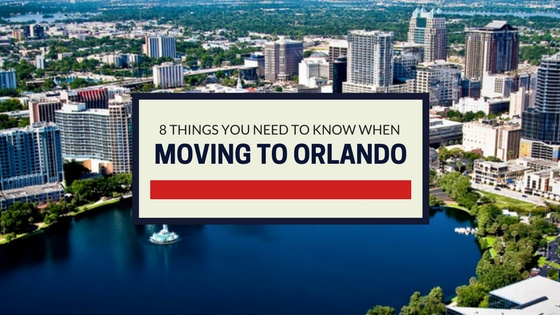 Orlando is a large city, especially if you are from a small town. Before moving you might want to learn a few tricks from the natives. Here are 8 things you should know when making your move to the “City of the Beautiful”.

Florida is known for being extremely hot not only during the summer but during the winter. Though the northern cities might get a little cold Orlando is right in the center where it pretty much stays warm all year round. This is why golf is one of the most popular sports in the state. You can play all year round. If you hate the cold, you will fit right in.

Orlando has tons of theme parks if not in the city right down the road. Theme parks come with traffic, tourists, and long lines. Though nothing about that sounds fun there are positives to having the theme parks nearby. The theme parks provide thousands of jobs. They are also a great amount of fun, when it isn’t tourist season of course.

With warmth come bugs, lots of them. Be prepared to endure mosquitoes, spiders, and other creepy crawly creatures. Make sure you purchase a large supply of bug spray before heading down south.

University of Central Florida is located in Orlando and is the second largest school in the nation enrolling 64,000+ students. So if you are a college student coming to Orlando you have plenty of people to make friends with.

People that have live in Orlando don’t blink when there is a hurricane headed their way. The city isn’t exactly in the danger zone and most times everyone continues on with their daily routines. So don’t let hurricanes stop you from moving.

Orlando not only has the local malls around the outskirts, but it has four extravagant malls within: The Mall at Millennia, Orlando Fashion Square, Artegon Marketplace, and the Florida Mall. So try not to drain your bank account when you move to the city.

Taking a vacation when living in Orlando is pretty simple. There are a plethora of resorts nearby where you can take a “stay-cation”. The closest beach is only an hour away but if you feel like driving a little bit further there are plenty more to visit. Drive 2 hours north to St. Augustine or drive 4 hours south to Miami. No need to take a plane to get away for the weekend!

Orlando has its pros and cons and it’s up and downs. Mosquitoes and bugs might be an issue but hurricanes won’t bother you for the most part. Shopping might cost you some but finding your dream house at a low price is possible. The theme parks might bring traffic and tourists but they also bring jobs and fun. Moving to Orlando can be a big change but knowing a little bit about the city should help you for your move down south! If you find yourself waiting for a perfect home or are in need of extra storage space in Orlando, give us a call.

Find a Unit Right for You Today!

This website uses cookies to improve your experience while you navigate through the website. Out of these, the cookies that are categorized as necessary are stored on your browser as they are essential for the working of basic functionalities of the website. We also use third-party cookies that help us analyze and understand how you use this website. These cookies will be stored in your browser only with your consent. You also have the option to opt-out of these cookies. But opting out of some of these cookies may affect your browsing experience.
Necessary Always Enabled
Necessary cookies are absolutely essential for the website to function properly. These cookies ensure basic functionalities and security features of the website, anonymously.
Functional
Functional cookies help to perform certain functionalities like sharing the content of the website on social media platforms, collect feedbacks, and other third-party features.
Performance
Performance cookies are used to understand and analyze the key performance indexes of the website which helps in delivering a better user experience for the visitors.
Analytics
Analytical cookies are used to understand how visitors interact with the website. These cookies help provide information on metrics the number of visitors, bounce rate, traffic source, etc.
Advertisement
Advertisement cookies are used to provide visitors with relevant ads and marketing campaigns. These cookies track visitors across websites and collect information to provide customized ads.
Others
Other uncategorized cookies are those that are being analyzed and have not been classified into a category as yet.
SAVE & ACCEPT